I’ve been doing quite a lot of work with PowerApps for clients recently, and it’s been an interesting time. No doubt I’m still not the world’s most capable PowerApps implementer by any stretch of the imagination, but I feel like I’ve been through the usual denial/anger/acceptance phases that often come with a new technology 😉 Some of my work has centred on a proof-of-concept application for one of the big airlines – specifically, building an app that pilots should be able to use whilst offline on an iPad. The project was to digitise some forms related to booking leave, which is an important part of flight crew scheduling. We effectively rolled 3 forms into one app: 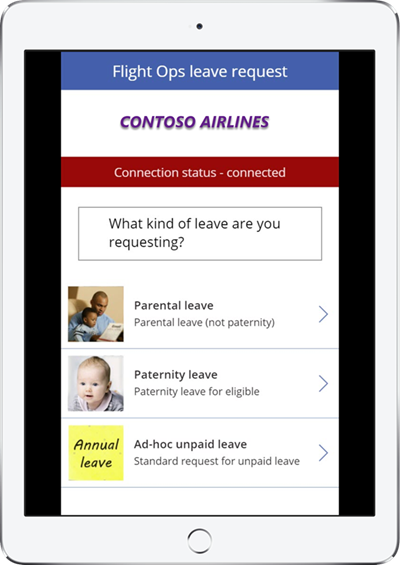 I gave a presentation on this recently to my colleagues at Content and Code, but I’ve also genericised some of the information so it can be shared more widely (Contoso Airlines!). The deck shared below is a combination of some typical lessons learnt and tips, but also has my thoughts on where PowerApps is a technology, structured into “the good, the bad and the ugly”.

Potentially transformative, but with a learning curve..

My conclusions are that it’s a great technology and although it’s aimed at forms-type applications in general, it really shines for relatively simple mobile apps. The organization just has to deal with getting users to have the PowerApps app installed (either from the app store, via an MDM solution such as Intune or Airwatch, or another approach) and then all the PowerApps forms and applications the organization provides will show up there. This is *far* easier and cheaper than developing individual native apps on iOS and Android, which each need to be distributed to users once the build is complete. In contrast, it’s feasible that you could have your Office 365 users working with a simple PowerApp on their mobile device within hours. Think about that for a moment! Sure, PowerApps doesn’t give you the richness that a high-end native app can have, but the barrier to entry is much lower.

However, it’s not always the simplest for the app implementer to work with. Frequently, things can get into a territory that I’d argue most power users would struggle with. An example in my case was having to abandon the default SharePoint integration/data-handling, and craft my own formulas which use the Patch() function to add an item to a SharePoint list (necessary because my form used multiple screens). This is fiddly work if you have lots of form fields and columns in the underlying list, even for a developer used to such things.

The implementer must choose between two approaches – customizing the form of a SharePoint list, or creating a “standalone” PowerApp (which might talk to the very same list). Conceptually these are quite different, and have different behaviours. This decision is expressed in the PowerApps menu on a SharePoint list:

A key thing here is that customized SharePoint forms do not show up in the PowerApps app: 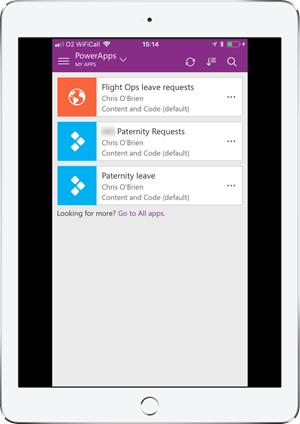 If users need to work with a customized SharePoint list on their mobile device, then using the SharePoint mobile app instead provides a reasonable experience – in fact, the SharePoint app should hand-off to the PowerApps app when you go to the list, and the customized PowerApps form should then be loaded. However, this currently seems to be a bit hit and miss – most often, I actually just get a web rendered view of the PowerApp, and here it seems that the experience isn’t as optimized for mobile as a true PowerApp – some pinching/zooming is often necessary.